Trigg and I celebrate May 11th as the day we fell in love with each other (even though we didn’t realize it at the time). We call it “Our day”. If I remember correctly, Trigg and I have never spent Our day together since we entered a relationship with each other over three years ago, but May 11, 2015 was going to be the first time! I was a senior in high school and drum major of the Berwick High School Sound of Pride (SOP), and May 11th was also the date of the band’s spring concert– my very last band concert, and the last time I ever conducted SOP. My high school graduation was also that same week, so after Trigg finished  taking his finals, he and three of his siblings planned to drive to Louisiana to see me and attend my spring concert.

They ran a little late, and though my concert started at 6:00, the last I heard before I put my phone away was that they would arrive anywhere between 5:45 and 6:00. The band filed into the gym, and I took my seat at the head of the flutes, feeling jittery about playing my last concert and seeing Trigg. Time passed, 6:00 came, and the concert began…

But Trigg never got there.

In between every song (and sometimes while playing) I looked back and forth from the entrance to the place where my family was sitting, just waiting for Trigg to get there.

But Trigg never got there.

Eventually, about half-way through the concert, I saw my dad get a phone call and leave the gym. I was curious, and I began to worry. He eventually came back in, sat down, and whispered something to my mom. After the next song, while some awards were being handed out, my mom began motioning me to go to her. I was so confused. I told her no, and eventually my dad got up and came over to talk to me.

He told me that Trigg and his siblings had gotten in a wreck.

The car was totaled, and by the grace of God no one was seriously injured, but Trigg and his siblings were taken to the hospital in an ambulance. They were at a hospital 30 minutes away, being checked by the doctors. In my emotional state, all that registered was Trigg, wreck, totaled, ambulance, hospital.

And I cried. In the middle of my concert.

Shoutout to some of my best friends, the flutes and clarinets of SOP. They all comforted me and prayed with me (still in the middle of the concert, by the way), and then the concert went on. I went through the motions, playing the rest of the concert. I even gave a speech and conducted the band. But finally, the concert came to an end. I ran back to the band room, grabbed my stuff, hugged my band director goodbye, and jumped into the car. Trigg’s parents were actually in Louisiana, but my parents and I were closer to the hospital, so we left straight after the concert to go see everyone.

We drove to the hospital and found our way to the ER, and I ran straight to Trigg. What a way to spend our first Our day together. I fell into his arms and stayed there, happy to find that his only injury was a (pretty bad) brush burn from the airbag. At least the airbag went off.

It was hard to let go of Trigg, but I eventually learned that each of his siblings had also walked away from the accident with mere cuts and bruises. The couple in the other car was also fine. Everybody was okay…except for the car! 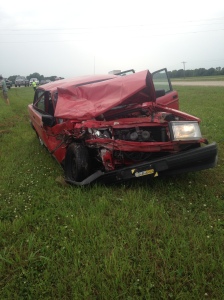 After leaving the hospital, we drove 30 minutes farther from home to find where the car had been towed, and we saved everything salvageable. Then everyone drove back home, stopped at Walmart to pick up some supper, and stayed the night at my house. Supper was sandwiches and chips, and we ate after midnight.

The next day, everyone was a little more cheery, and I was grateful to learn that even though the doctor had warned everyone that the soreness would hit hard in the morning, Trigg and his siblings still didn’t have excess pain. I also learned that when the ambulance took them to the hospital, they all had to wear neck braces! Check it out! 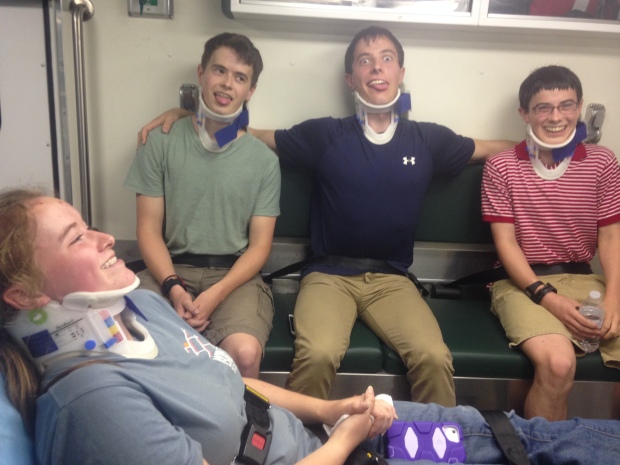 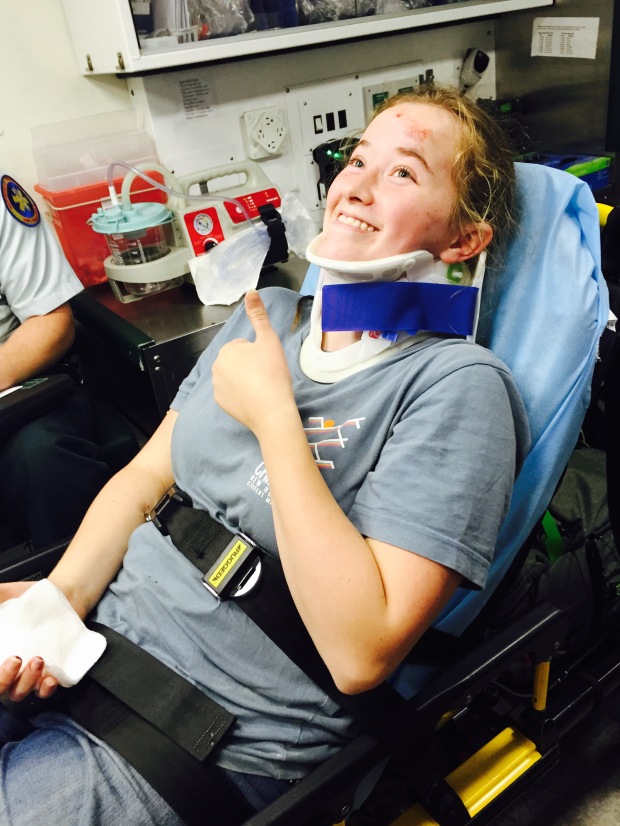 Personally, I think they were having fun!

Looking back, I see that God took care of me on every side, just like he took care of Hezekiah in 2 Chronicles 32. He always does. No matter what I go through in my life, he never lets me down! 1 Peter 5:7 says, “Cast all your anxiety on him because he cares for you”. God wants to hear all of my stresses, worries, and fears! Because he cares for me. And that in itself is amazing. I want to keep trusting him in all circumstances, and I have faith that my God will never fail.

But that was only one day! There were still two weeks of craziness to come. Stay tuned for The Craziest Two Weeks of my Life (Part 2).

Welcome to my website! My name is Cari La Tour, and I live just outside of Fayetteville, AR, in a little town called Lincoln. I am married to the love of my life, Trigg, and we have a beautiful baby girl named Nellie. Thanks for visiting!